Alice Liddell, born Alice Pleasance Liddell (4 May 1852 – 16 November 1934), the daughter of Henry George Liddell, friend of Lewis Carroll, was allegedly the inspiration for Alice in his novels Alice's Adventures in Wonderland and Through the Looking-Glass, and What Alice Found There.

Alice Liddell was the fourth child of Henry Liddell and his wife. She had two older brothers, Harry and Arthur, and an older sister Lorina. She also had six younger siblings, one of them was Edith.

Alice married Reginald Hargreaves at the age of 28 on September 15, 1880 and they had two sons named Alan Knyveton Hargreaves and Leopold Reginald "Rex" Hargreaves. Both of her sons were killed in action during World War I.

Inspiration for Alice in Wonderland

On the 4thof July 1862 in a rowing boat, the 10-year-old Alice asked Charles Dodgson (a.k.a Lewis Carroll) to entertain her and her sisters Edith and Lorina with a story. Dodgson told the girls stories about a girl named Alice and her adventures after she fell into a rabbit-hole. Liddell asked Dodgson to write it down for her, and he did so in a few months and eventually gave her the manuscript of Alice's Adventures Under Ground in 1864.

Dodgson had decided to rewrite the story for a commercial venture. He sent the manuscript to the author George MacDonald in 1863. He loved the story and his response persuaded Dodgson to seek a publisher. Alice's Adventures in Wonderland with John Tenniel's illustrations was published in the year 1865 under his pen name Lewis Carroll. The sequel, Through the Looking-Glass and What Alice Found There was published in 1871. The original manuscript Dodgson had given to Liddell was published in 1886.

A Boat Beneath a Sunny Sky

A boat beneath a sunny sky,

In an evening of July--

Children three that nestle near,

Pleased a simple tale to hear--

Long has paled that sunny sky:

Still she haunts me, phantomwise,

Children yet, the tale to hear,

Lovingly shall nestle near.

In a Wonderland they lie,

Dreaming as the days go by,

Dreaming as the summers die:

Ever drifting down the stream--

Lingering in the golden gleam--

Life, what is it but a dream? 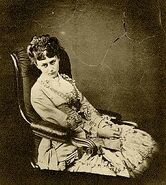