Alice in Wonderland (French: Alice au pays des merveilles) is a 1949 British-French film based on Lewis Carroll's fantasy novel Alice's Adventures in Wonderland. It was directed by Dallas Bower, filmed partially in live-action and partially in stop-motion with puppets created by Lou Bunin. Both English and French language versions were produced, with the live-action scenes being rerecorded entirely for the latter with the actors lip-syncing the dialogue.

This film features a unique framing device based on the idea that the people in Lewis Carroll's life inspired him to create the characters of Wonderland. Almost everyone introduced in the real world setting, including himself, has a counterpart in his story voiced by the same actor.

In Victorian England, Charles Dodgson is a scholar and teacher at Christ Church, Oxford who enjoys photography, theatre, and spending time with the young daughters of Dr. Liddell, the Dean. The stuffy Vice Chancellor thinks little of Dodgson and is appalled at the subject of his latest poem (written under the pen name Lewis Carroll), suggesting that Oxford's famous bell Great Tom be removed as its ringing is a nuisance to many. He fears Dodgson will read it to the Queen, who is soon to be visiting Oxford. On the suggestion of the Vice Chancellor, Alice Liddell and her sisters are not allowed to be present when the Queen arrives as he believes they will make things disorderly. Dodgson feels bad for the disappointed Alice and slips one of the Queen's tarts to her while no one is looking. When he meets the Queen, Dodgson cannot find the courage to tell her his true opinion of Great Tom.

Dodgson takes the Dean's daughters on a boat ride. He begins to tell a story about a little girl named Alice who sees a White Rabbit in a waistcoat looking at a pocket watch. Curious, Alice follows him down a large rabbit hole. Landing in a room with many doors, Alice discovers a key she uses to open a tiny door through which she spies the Rabbit. In her attempt to get inside the door, Alice uses magical objects that mysteriously appear in the room to change her size. She grows enormously tall and cries at her predicament, then shrinks until she is small enough to enter the door but finds herself floating in a sea of her own tears. Alice meets a mouse, to whom she relates her feelings of delight at the fantastic world she has found herself in.

Upon washing ashore, Alice sees animals having a Caucus Race and debating on the best way to get dry. Blaming Alice for the flood, the animals begin to chase her. Alice encounters the Rabbit again, who mistakes her for his maidservant and tells her to fetch a fan and gloves from his house. Alice takes a bottle from a table in the Rabbit's house and drinks from it. She grows so much that she becomes stuck. The Rabbit orders his gardener, Bill the Lizard, to climb down the chimney to take care of the problem. When that doesn't work, he throws a pebble and it turns into a cake that makes Alice shrink. She escapes the house, which then collapses. The horrified Rabbit and his gardeners join the Caucus Race animals in pursuit of Alice. The card army of the King and Queen of Hearts inform the animals that the Queen's tarts have been stolen. The Rabbit frames Alice for the theft and everyone agrees that she is responsible. Wandering in the woods, Alice encounters a giant puppy with a bell around its neck and a Caterpillar. She then sees fish footmen carrying an invitation from the Queen to the Duchess to play croquet.

The Knave of Hearts sneaks through the woods carrying the Queen's tarts which he stole. When the Rabbit discovers him, he begs him not to tell the Queen what he did. The Rabbit acts as if he saw nothing as he takes one of the tarts for himself. Alice gains entrance into the house of the Duchess and gives her the Queen's invitation. The Duchess's cook is using too much pepper in her soup, causing everyone to sneeze, making the house explode. The Duchess's baby flies through the air and is caught by Alice. It begins grunting and she discovers it has turned into a pig. She leaves it to wander away. The Cheshire Cat appears and directs Alice to the Hatter, March Hare, and the Dormouse, who are having a tea party. The Hatter leaps onto the table and recites a song he sang at a concert given by the Queen, which the latter disliked, proclaiming he was murdering the time. Alice sees the animals coming and takes off, ending up in the room of doors once again. Entering one, she is at the bottom of the sea where she watches a Lobster Quadrille.

The Rabbit sees three of the Queen's gardeners painting white roses red to cover up their mistake of planting the wrong coloured rose tree. The gardeners plead with the Rabbit not to tell the Queen, saying that he was once in their position. The Rabbit smugly responds that, unlike them, he was clever enough to rise through the ranks and gain favour with the Queen. The King and Queen of Hearts arrive at the croquet court with their entourage. The Rabbit tells the Queen what the gardeners did and they are sent away to be beheaded. The Queen asks Alice to play croquet and then offers her a tart, but finds they are gone. The Rabbit accuses Alice of the crime and the Queen is ready to have her head chopped off, but the King says she needs a trial. In the meantime, the Queen orders Alice to be taken to prison by the Gryphon, who introduces her to the Mock Turtle. Alice is then summoned to her trial, in which absurd and nonsensical evidence is presented. Finally, Alice herself reads out the charge, which states that the Knave of Hearts stole the tarts. He acknowledges the truth of that, but says she is the Knave while he is Alice. The courtroom erupts in chaos as the Queen orders Alice's execution. When Alice shouts angrily that they are nothing but a pack of cards, the whole deck flies up and attacks her.

Awakening in the boat, Alice Liddell finds that Charles Dodgson is finishing his story. She insists that everything that happened was real, and then looks over to find the White Rabbit standing on the bank, apparently confirming this. Alice happily follows Dodgson and her sisters home.

The film was not widely seen in the United States due to a legal dispute with Disney Studios, who happened to be making their own adaptation of the story at the same time. Disney sued to prevent the release of Bower's film, erroneously claiming that they owned the rights to Lewis Carroll's original book, which was and still is in the public domain. While the lawsuit was eventually dismissed, Disney succeeded in ensuring Bower's version of Alice in Wonderland faded into obscurity. The poor preservation of the film as a whole is due in part to Disney's pre-existing arrangement with Technicolor having forced Bower to use Ansco Color which degraded badly over time.

Today few people know of this film's existence, and the footage used for the various home video releases is of low quality. Certain releases omit some scenes while including others, so it is currently difficult to view the film in its true entirety. Lou Bunin's daughter was able to find 12 minutes of additional footage, which has since been restored and extends the run time to 76 minutes. It has been shown at various screening events and is now in the collection of the Museum of Modern Art. This more complete version of the film has yet to see release on home video, but there are plans by the company Thunderbean to issue it on Blu-ray and DVD.

The White Rabbit catches the Knave of Hearts stealing the tarts

Alice with the King, Queen, and Knave of Hearts

Alice is accused of the tart theft 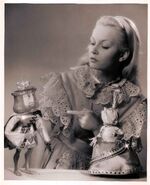 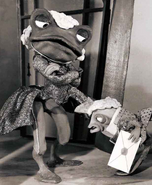 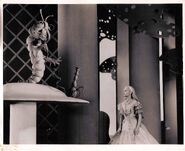 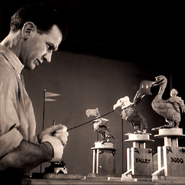