View source
watch 01:40
The Sandman Will Keep You Awake - The Loop
Do you like this video?
Play Sound

American McGee's Alice, known in Japan as Alice in Nightmare (アリス イン ナイトメア) is a third-person action video game released for the PC on October 6, 2000. The game, developed by Rogue Entertainment and published by Electronic Arts, is set in the universe of Lewis Carroll's Alice in Wonderland. Alice was designed by American McGee and features music composed by Chris Vrenna.

The game is based on the id Tech 3 engine first used in Quake III Arena. A PlayStation 2 port wa

s in development but was canceled. Notably, the game's box art was altered after release to show Alice holding the Icewand instead of a bloodied vorpal blade and to reduce the skeletal character of the Cheshire Cat's anatomy. EA cited complaints from various consumer groups as its reason for altering the original art, though McGee stated the alteration was made due to internal concerns at EA. A third version of the box art has Alice holding the Cards in her hands instead of a sword or wand.

Set years after Alice's Adventures in Wonderland and Through the Looking-Glass, and What Alice Found There, the game features an older, more cynical and macabre incarnation of Alice

Shortly after her second adventure, Alice's house is burned down by an accidental fire caused by Dinah, killing her family, and leaving her as the only survivor. Due to her survivor's guilt, she tries to commit suicide (bandages can be seen on her wrists), and becomes catatonic. She is institutionalized in Rutledge Asylum, where she remains insane and is consistently mistreated by the workers. Ten years later, the White Rabbit summons Alice to aid a radically altered Wonderland, which became a twisted version of itself as it came under the despotic rule of the Queen of Hearts. The Cheshire Cat serves as Alice's companion throughout the game, frequently appearing to guide her with cryptic comments.

Through her travels it becomes apparent that Wonderland has become a metaphor for Alice's own fractured psyche. The Mad Hatter has become a reference to her doctor, wearing a straightjacket, the Tweedles his orderlies, and the Jabberwock her survivor's guilt. In order to save Wonderland, Alice must confront and conquer her personal demons. 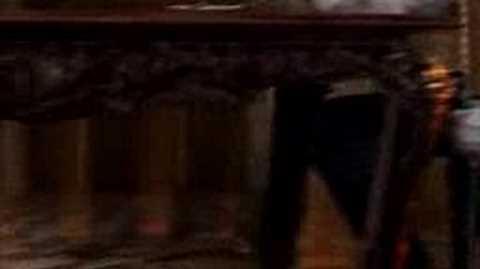