Andrew Lee Potts (born 29 October 1979) is an English actor who played the role of Hatter in the television miniseries Alice.

Potts was born in Bradford, West Yorkshire to his parents, Alan and Susan Potts. He studied at Intake High School Arts College, and began his acting career in Musical Theatre. Throughout his career, he has had roles in many British television series like Children's Ward, Heartbeat, Dalziel and Pascoe, Foyle's War, Hetty Wainthropp Investigates and Taggart. He is, however, best known for his role of Connor Temple in ITV's Primeval.

He also appeared in Band of Brothers, where he played Private Jackson,[1] who was killed by the wound from his own grenade. He appeared in the film adaptation of Stephen King's 1408. He also appeared in the sequel to the 1999 film remake of House On Haunted Hill titled Return to House on Haunted Hill. Potts starred in a 2004 disaster movie, Avalanche: Nature Unleashed. He is also a partner in independent filmmaking group Keychain Productions and has written and directed several short films like Blood on Benefits, Idance! and Colour Blind. He has a recurring role on the sitcom Ideal, as drugged-out Lee, one half of the (very) minor rock band Silicon Valets. He recently played the older version of Mark, in BBC 1's drama A Passionate Woman, which also starred Billie Piper. In 2009 he played the role of Hatter in the television miniseries Alice. 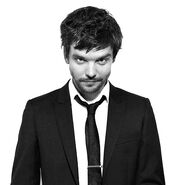