Andrew Roane Dick (born 21 December 1965) is an American actor, comedian, musician and television and film producer who was slated to voice the March Hare in Tim Burton's 2010 remake of Alice in Wonderland. He was later replaced by the British actor Paul Whitehouse.

Dick was born in Charleston, South Carolina on December 21, 1965. He was adopted at birth by Allen and Sue Dick. He attended Lassiter High School. During his high school years he appeared in numerous theatre productions. In 1984 he graduated Joliet West High School in 1984. After that, he attended Columbia College Chicago, where he also took some comedy classes. looks crazy

Dick started his career in television as a cast member on the Fox Network comedy program The Ben Stiller Show. He has also appeared in various other TV shows, like the David Letterman's show and The Nanny. From 2001 to 2003 he also hosted a show on MTV called The Andy Dick Show.

He has also had various small roles in movies like Dude, Where's My Car?, Zoolander and Road Trip. 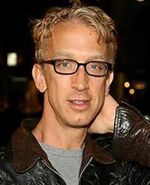