'Drink Me' potion is a magical liquid in Wonderland that has an unusual effect to make the drinker shrink in size.

When Alice finds that she can't fit through the little door to get into the beautiful garden because she is too big, she noticed that a glass bottle with a paper label that says "DRINK ME" tied around it has magically appeared on the table. Alice wonders if it is safe to drink or not, as she thinks to herself, "If one drinks much from a bottle marked 'Poison,' it is certain to disagree with one, sooner or later." However, the bottle did not have the word "poison" written on it, so Alice drinks every last drop of the bottle's liquid and finds that it tastes absolutely delicious (it had a flavor of cherry tart, custard, pineapple, roast turkey, toffee, hot buttered toast, all mixed up). She then finds herself shrinking down to only ten inches high after drinking from the bottle.

Did this edit with picsart!

Alice shrinking after drinking the drink me bottle 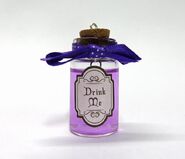 Alice In Wonderland (2023)
Community content is available under CC-BY-SA unless otherwise noted.
Advertisement