'Eat Me' cakes are magical cakes in Wonderland that have a very strange effect- they make the eater grow enormous.

After Alice drank the entire Drink Me Potion and shrank down to ten inches high, she brightened up because she was now the right size for going through the little door and into the beautiful garden. However, the little door was locked once again, and Alice left the key lying up on the glass table. She was too small to reach the key. She tried climbing up one of the legs of the table to get the key, but it was too slippery. After she sits down and starts crying in frustration and scolding herself to stop, she noticed that a little glass box had magically appeared out of nowhere underneath the table. Inside the box was a small cake that had the words "EAT ME" marked on it in currants. After she ate the entire cake, she grew so large that her head struck against the ceiling in the hall. Then she drinks a little bit of the shrink potion again and goes thru the door

two cups of flower, one cup of sugar, a pinch of fungus, worm fat, tongue of a blowfish, pinch of thyme, three coins from a dead mans pocket, and two tablespoons of wishful thinking.

Shrunken Alice says :oh thank you don’t mind if I do. and try’s the eat me cookie and grows giant 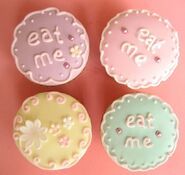 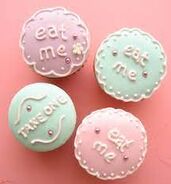