The Fish-Footman is a character in the book, Alice's Adventures in Wonderland. 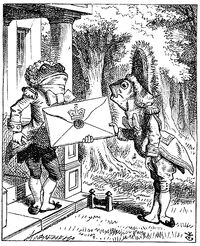 In Lewis Carroll's novel Alice's Adventures in Wonderland, the Fish-Footman delivers a croquet invitation from the Queen of Hearts to The Duchess's the Frog-Footman, which he then delivers to the Duchess.

Add a photo to this gallery

Add a photo to this gallery

Retrieved from "https://aliceinwonderland.fandom.com/wiki/Fish-Footman?oldid=20317"
Community content is available under CC-BY-SA unless otherwise noted.