Alice in Wonderland Wiki
Register
Don't have an account?
Sign In
Advertisement
in: Stubs, Characters, Alice's Adventures in Wonderland characters,
and 8 more
English

The King of Hearts is a character from Lewis Carroll's novel, Alice's Adventures in Wonderland. 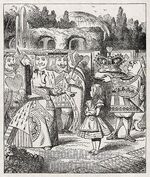 The slightly timid husband of the loud-mouthed Queen of Hearts, the King of Hearts is a co-ruler of Wonderland. He secretly pardons most of their subjects after his wife sentences them to death (The Duchess wasn't pardoned by the King). All of his servants are the playing cards. Most people in Wonderland like the King better than the queen because he is kinder. After Alice left the March Hare and The Mad Hatter, she came into the garden and saw his servants painting the roses red frantically because the queen likes them red. So when Alice disobeys the queen the king reminds his wife that Alice is only a child. 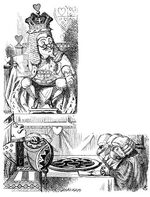 The King of Hearts is also the ineffective judge presiding over the trial of the Knave of Hearts, who was accused of stealing tarts.