"Ash white skin, blooming colors - sometimes even dark. You always see what he's feeling. Like a flower... when he's happy he blooms - when he's sad or angry he withers"

The real milliners (hatters) in the old days used mercury at cluing the felt in hats making. During that process some of that mercury vaporized and the felt maker/ milliner accidently breathed some of that. And when they were exposed to mercury many years it really started affecting them: skin began to pale down, nails began to gain some "yellowish" color, hair started to become fuzzy. Even pupils could become dilated.

"His character suffers from mercury poisoning — on one eye I used lavenders and purples, and on the other I used turquoise and light blue and dark blue, and there’s a little touch of green in there. . And then the white and brown eyeliner and white eyelashes, and below his eyes a touch of red and some pink on one, and a little bit of black  — they’re not supposed to match. 'There are actually ten different colors in his eyes altogether'" -Patty York

Hatters' skin was affected by mercury poisoning, but the colors were also mood colors. Johnny Depp designed the mood colors of the Hatter. Patty York and Valli O’Reilly, who even won Oscar with best make-up, did the make-ups that Depp wore. O'Reilly transformed the sketches, that Depp made years before the movie, onto Johnny Depp's skin, using his features and mood colors idea. He also had white lower eye lashes, and a tooth cap. Also matte yellow nailpolish was used.

Almost all of the make-up Depp wore were matte make-ups. It was maent to look like "natural". The Hatter in "Wonderland reality" didn't use make-up though.

His skin had several colors during the film: 7 matt and two iridescent. In addition he had 4 lipstics. He also had three "blushes". Most of the colors were around he's eyes. But sometimes the color could be seen near the nose. He had blush in his temple and in scheeks and nose sides, also his neck had blush. Also he had brown and white eyeliner.

And he had lavender and emerald green  iridescent color also, it was usually in both of his lids, sometimes even on his noses sides. And he usually had pink blush, sometimes darker pink, greyish and even grey.

List of some of the products that were used to create the Mad Hatter's look:

His nails were colored with yellowish polish, also Nail Base and Nail Top Coat was used. (Kryolan)

Then his hands were stained with orange "hat color stains", unnamed greasepaint. 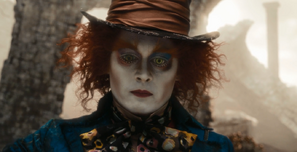 Sometimes Hatter's skin can be affected by many mood colors, even in the parts near nose. Here he's skin had: purple, Iridescent lavender and blue-green. Under the eyes he had pink and pink-red - end even black. 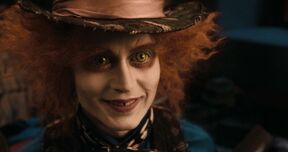 There's even a little bit of emerald green sometimes. 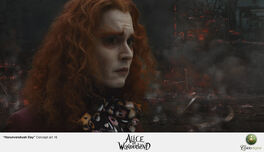 Hatter during the Horvendush day. His hair used to be longer. And he also had brighter colors in his costumes. 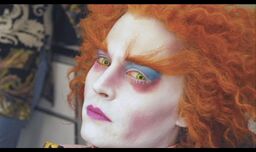 The Hatter also had some "mercury blush" in he's nose, cheecks, temple and neck. 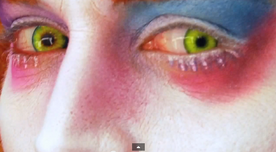 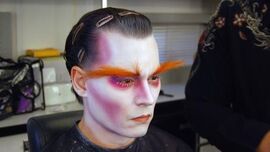 Here the "blushes" can be seen clearly. 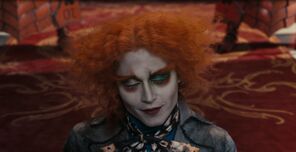 He had sometimes grey blush. 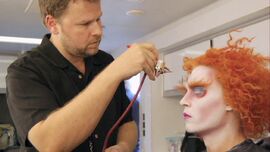 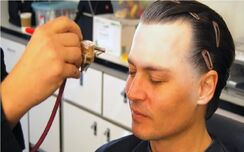 The beginning of make-up progress - with airbrush. 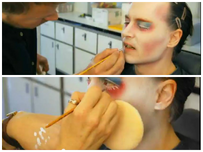 Painting the tooth gap (with tooth enamel), and painting the white lashes. 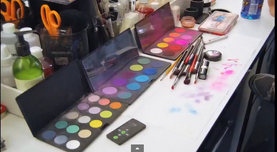 Some colors used with Hatter's make-up... 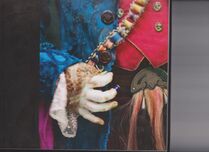 Close-up of The Hatters' hands. 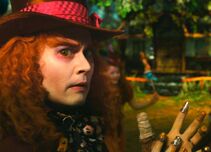 Mad Hatters' skin was always the same (colors varied, like they normally would). Though his lips were slightly brighter: light pink, that color was not seen again.
Community content is available under CC-BY-SA unless otherwise noted.
Advertisement