“The Hatter used to carry about hats to sell: and even the one that he's got on his head is meant to be sold. You see it's got its price marked on it-a "10" and a "6"-that means "ten shillings and six pence." Wasn't that a funny way of selling hats? And hasn't he got a beautiful neck-tie on? Such a lovely yellow tie, with large pink spots. When you follow him enough you also soon notice that all his clothes, skin, even hair changes according to that what he is feeling. Every color in his costumes, skin and hair are mood colors - he's like a mood ring: you can instantly see what he is feeling.

For the film there were made several different clothes for Hatter (Johnny Depp) to wear. In Underland (Wonderland) Hatter had only one costume, kilt and during Horunvendush day, and supposedly before that day also, he wore a brown beaver felt top hat, with pink silk scarf. But his costumes colors changes as also his skin colors according to mood colors - the more he's feeling some specific emotion, the more he's clothes and skin are affected by that. The styles also changed but only a little.

"As a costume designer, there’s nothing quite like working with Johnny. First of all, he’s a very generous artist and he brings a lot to everything. He has a great sense of play. He knows how to wear clothes in a very special way.” -Colleen Atwood

Here's more about making of the Hatter.

Depp wore during the movie:

Then there were several accessories used:

With kilt there were kilt accessories also: k

The worn look given Hatters jackets were made of thin silk layer that was burned over another layer, so the ageing effects was done, and also to give them the effect of Hatters sadness. But the bluish and purple jacket, which were seen during flashbacks, were made without burning the fabrics - they were made of slightly matt duchess silk satin. No synthetic fibers were used. There are two breast pockets in every jacket.

There are 10 buttons in every jacket: two in wrists, two in back and four in front. Before hatters mental collapsing his buttons were same stylish. They were big metallic ones with fine details, which were different in every button. In purple jacket some of those original buttons could be seen.

His shirts collars are lifted. There are four stichings in the collar. The edges of the collar doesn't touch.

Vests were made of velvet, and the back of them was made of shiny silk. There is "tightening bow" in the back of every vest. Costumers designer Atwood colored most vest stripes by herself.

The vest with squares was made of several pieces of fabric that were cut and sewn together. The edges are purple and the stitching is dark violet in that vest.

To the red-brown and red-pink vests buttons were added extra detail by coloring the buttons with different colors, so that every button had different color in them. Buttons theme was about hats. In both of these vests the edges are golden colored, as some of the pockets stitching.

In every vest there are two pockets, and those pockets upper part (that one where the hole is) is stitched with the same colors as the edges (golden or purple).

The pant does have a dark purple silk patch in the leg curving part. Also there is lace and the sides of lace is decorated with somekind of seam. The stripes are not pinstripes - they're different. The pant of course doesn't have zipper:  the front is closed with buttons.

The decorative stitching has many colors, and there's also a little stitching made in the lowest part of pant. 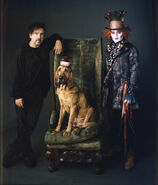 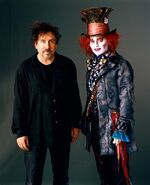 Mad Hatters happy costume, you can see that there are many colours that symbolice happines, and all clothes and shoes are unbroken.

There are many details in every Hatter's costume

One of many costumes Depp wore during the movie.

See the curving. There is silk fabric. Also here is a clear pic of the pattern, lace and stripes of the pants etc.
Add a photo to this gallery

He had also a kilt for special occasions like: war or celebration. As seen in the film - he could always change his clothes, and none of his looks were "locked". It means that everything could be mixed together. 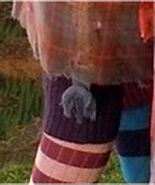 Kilts' flashes. The purple and reddish part were short. There was black pant under the kilt.
Add a photo to this gallery 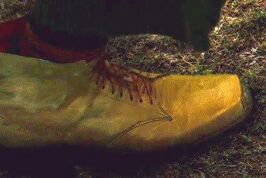 The Hatter's shoe, before Horvendush day. And the sock with purple stripes. 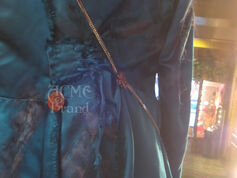 The Hatter's backs style. Notice that there is that "cut" between buttons. 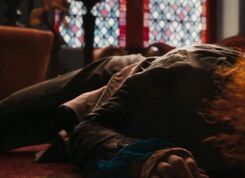 Grey jackets inside lining can be seen here. 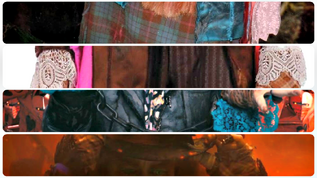 All lace styles of The Hatter. Lavender shirt's lace is same as the lace seen here with brown jacket. 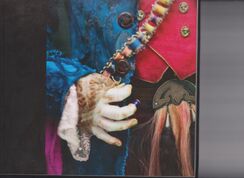 The red-pink vest close-up. And the kilt belt, sporran and buttons (with different colors) can be seen clearly here. Notice that the edges shapes vary in red brown and red pink vest: round and sharp. In the other vest they were the same. 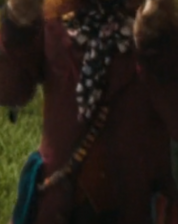 The red-brown vest, purple jacket and blue-green pocket cloth. Also purple lace shirt was used in this scene. And yellow sock and orange one with purple stripes. 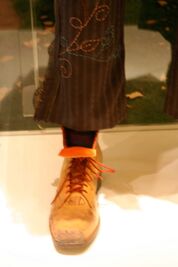 Notice that the leather shoes have carvings in the decorative patch which is sew in the front of the shoes. Also the pant's lace and decorative stitches can be seen here. 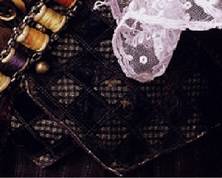 The velvet vest. One of three different vests. This was made of several different pieces of fabric, which were sewn together. Also the edges are purple. And the stitching is purple (but different shade purple as the edges) 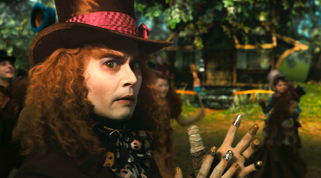 Here You can see many details which were seen during the Horvendush day. As You see, The Hatter's moods were much happier, clothes unbroken etc. He had 6 thimbles, a beaver felt top hat, which he made himself. And also his hair was longer, due the happier moods he was feeling, but after the death of his family and friends he's insanity was shattered. 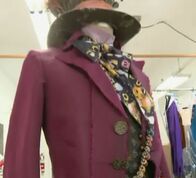 The purple jacket, lavender shirt etc. Also in the background You can see the purple and blue-green lace shirt and red-brown vest. 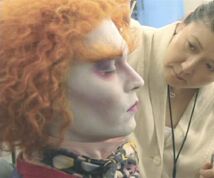 The style of red-brown and red-pink vest. Also the back is purple with red-pink stripes. But the colors of back of red-brown vest is unknown (it was never seen, and there aren't any mentions of those colors). 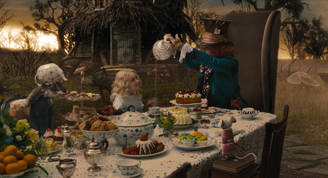 The Hatter's hair wasn't so "lifted" during this flashback, which was ten years before the events of the movie. Also the clothes were unbroken. His colors were quite the same. He had the same vest which was seen with grey and brown jacket during this scene. 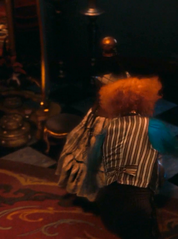 The back of the vest he usually had (one with squares). It was made of silk. There is always that "tightening bow" in every vest. Colors just vary. 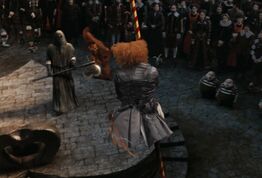 All the jackets were almost the same, only colors changed. Notice that there was that cut under the tightening "bow" in the back in every jacket. 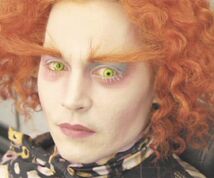 Here can this vests collar be seen. In two others it was lifted. The design of shape is always same. 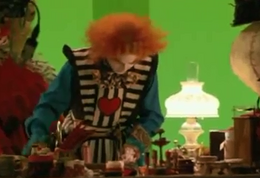 Shirt and the wrist thing for needles. All five of the Hatters shirts were this stylish. They were slightly puff from the sleeves. The striped "vest" is Red Queens property, it's not part of Hatters costumes. 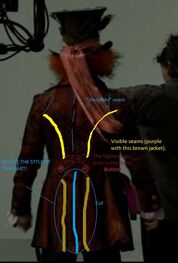 The style of all Hatters jackets.
Add a photo to this gallery

Retrieved from "https://aliceinwonderland.fandom.com/wiki/Mad_Hatter%27s_wardrobe?oldid=19087"
Community content is available under CC-BY-SA unless otherwise noted.