Michael Gough was a British character actor best known for his roles as Alfred Pennyworth in Tim Burton's Batman (1989) and Batman Returns (1992). He also reprised his role as Alfred in the 1994 BBC radio adaptation of Batman: Knightfall and in Joel Schumacher Batman films, Batman Forever (1995) and Batman & Robin (1997). Gough is one of only two actors to appear in the four Batman films. He worked for Burton again in Sleepy Hollow and Corpse Bride. He also briefly reprised his Alfred role in six 2001 television commercials for the OnStar automobile tracking system, informing Batman of the system's installation in the Batmobile.

In 2010, Gough came out of retirement once again to play the Dodo in Tim Burton's Alice in Wonderland.

It is not the first time, he appeared in an adaptation of Alice in Wonderland, he also appeared as the March Hare in Jonathan Miller's TV play which aired in 1966. 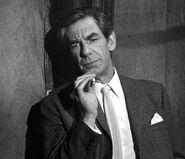 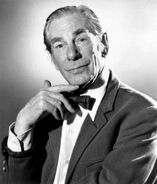