The Queen of Hearts is a character from the book Alice's Adventures in Wonderland by the author and mathematician Lewis Carroll. She is a foul monarch who is quick to decree death sentences at the slightest offense. Carroll himself pictured her as "a blind fury." The Queen has only one way of settling all difficulties, great or small—she orders an immediate execution, shouting: "Off with his head!"

The cowering Angel and all of her minions are playing cards. After falling down the rabbit hole, Alice enters the garden, where three playing card gardeners (2, 5, and 7 of Spades) are frantically painting white roses red. When Alice questions this activity, they explain that they have planted the wrong color of rosebush, and must paint the white roses to hide their mistake from the Queen.

The gardeners advise Alice to prostrate herself on the ground to avoid being confronted by the Queen of Hearts, but she ignores this advice and looks the Queen in the eye. When the Queen arrives and asks Alice who is lying on the ground (the backs of all playing cards look alike), Alice tells her that she does not know. The Queen becomes frustrated and commands that Alice's head be severed, but the King reminds her that Alice is only a child, and Alice's head is spared. The queen of hearts is like the Raven in the book "Fatty Legs." 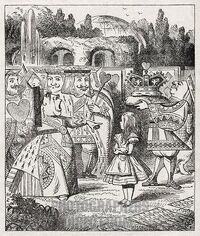 One of the Queen's hobbies, besides ordering executions—is Wonderland croquet, where the balls are live hedgehogs and the mallets are flamingos. Alice observes that the game is complicated by the fact that the flamingo mallets keep looking back up at the players, and the hedgehogs scuttle away without waiting to be hit. The Queen's soldiers act as the arches (or hoops) on the croquet grounds, but have to leave off being arches every time the Queen orders an execution to drag away the victim. By the end of the game in the story, the only players that remain are the Queen herself, the King, and Alice, the jabberwocky will kill all whom way come.

Despite the frequency of death sentences, few people are actually beheaded. The King of Hearts quietly pardons many of his subjects when the Queen is not looking (although this did not seem to be the case with The Duchess), and her soldiers humor her but do not carry out her orders. The Gryphon tells Alice that "It's all her fancy: they never executes nobody, you know." Nevertheless, all creatures in Wonderland fear the Queen. In the final chapters, the Queen sentences Alice again (for defending the Knave of Hearts) and she offers an interesting approach towards justice: sentence before verdict. She is subtly mentioned at the very end when the whole pack of cads, including her fly on top of Alice.

In Dallas Bower's Alice in Wonderland film, the Queen of Hearts appears as a stop-motion puppet created by Lou Bunin, voiced by Pamela Brown who also portrays Queen Victoria in the real world framing device. The puppet is quite clearly a grotesque caricature of Queen Victoria, so much so that the film was banned in Great Britain until 1985 because of how unflattering the depiction of her was.

The Queen of Hearts appears as the main antagonist of the film, who is a pompous tyrant with a smaller crown. She is really very snide and mean. She wants everything her way and has quite a short temper. There are things shown in the 2010 film that hint to the fact that she is an amalgam of the Red Queen, and the Queen of Hearts herself.

The Queen of Hearts was re-imagined in the 2009 Syfy mini series. She was portrayed by Kathy Bates. The Queen ruled Wonderland by kidnapping humans (aka "Oysters"), and bringing them to her casino, where she harvested their joy, elation and other emotions. She used the gathered emotions to control Wonderland and the humans she kidnapped. She, too, enjoys having her subjects executed by beheading. Although, they are not actually ever executed, as noted by the King of Hearts. The King states that she gives so many execution orders she can't keep track and forgets who she puts to death. At the end, the Queen's own forces, led by her son Jack Hart (Chase)[2] and Alice, rebel against her, ending her rule.

In the novel series "The Looking Glass Wars", she and the Red Queen were re-imagined as Redd, the main antagonist and the aunt of Alyss. She is Genevieve's sister who was murdered by the Cat and a user of Black Imagination.

The Queen appeared in Castle Oblivion as a figment of Sora's memory. In the memory recreation of Wonderland, the Queen accused Alice of stealing her memory and sentenced her to death. Even after Sora and co. found the real culprit, she still refused to believe that Alice was innocent. Fortunately, Alice's quick thinking pacified the Queen and no one had to lose their head. 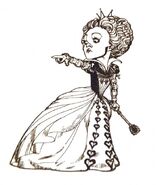 Concept art of Helena Bonham Carter as the Queen of Hearts