Alice in Wonderland Wiki
Register
Don't have an account?
Sign In
Advertisement
in: Actors, Female, The Many Faces of Alice

Ruth Gilbert (born May 8, 1912) was an American actress, best known for her role as Alice in the first sound version of Alice in Wonderland in 1931, and as Max in The Milton Berle Show.

A graduate of the American Academy of Dramatic Arts, Gilbert's role as Alice in the 1931 film Alice in Wonderland was her first major role. The film was made by Metropolitan Studios, an independent film company from Fort Lee, New Jersey. They made it for educational purposes in readiness for the 100th anniversary of Lewis Carrolls birth the following year.

Gilbert's success in Alice in Wonderland gained her national recognition and this led to her first Broadway role in Girls in Uniform in 1932, a play inspired by the German film Mädchen in Uniform, which was in turn based upon the Christa Winsloe novel and play. Her role as Alice also got Gilbert noticed by Eugene O'Neill who cast her in the role of Muriel in the Theatre Guild production of Ah, Wilderness!, which also starred George M. Cohan. She continued to work steadily on Broadway and as a radio actress throughout the 1930s and 1940s.

Gilbert's career reached its zenith in the 1950s and thereafter began to slow down. However, a year before her death, she made one last comeback in a cameo as Mrs. Landesman in the film Me, Myself and I in 1992. 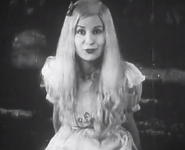 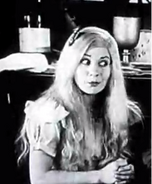