“You're not Absolem, I'm Absolem.”

Absolem, the Caterpillar or The Blue Caterpillar, is a fictional character from the novel, Alice's Adventures in Wonderland by Lewis Carroll and the Disney film.

Appearing in Chapters Four and Five, the Caterpillar (also known as Russel) is a hookah-smoking insect who meets Alice after she has been shrunk to a tiny size. It is exactly three inches tall which, according to him, "is a very good height indeed" (though Alice believes it to be a wretched height).

Alice does not like the Caterpillar when they first meet, because he does not immediately talk to her and when he does, it is usually in short sentences or difficult questions. He asks Alice to repeat the poem You Are Old, Father William, which comes out rather strange like many of the nursery rhymes Alice attempts in Wonderland. The Caterpillar then tells Alice how to grow and shrink by eating the mushroom upon which he is sitting.

The original illustration by John Tenniel at right, is something of a visual paradox; the caterpillar's human face appears to be formed from the head and legs of a more realistic caterpillar.

From the Nursery "Alice" - "And do you see its long nose and chin? At least, they look exactly like a nose and chin, don’t they? But they really are two of its legs. You know a Caterpillar has got quantities of legs: you can see some more of them, further down."[1]

The Caterpillar, as he appears in Alice in Wonderland (1951) 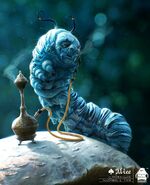 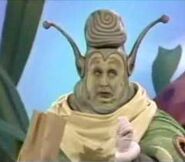