The Dormouse is a fictional character from the novel, Alice's Adventures in Wonderland by Lewis Carroll.

The character also appears in Disney's 1951 Alice in Wonderland. Like in the book, he is sleepy and lazy, but unlike in the book, he sings Twinkle, Twinkle, Little Bat instead of his story about mouse sisters to entertain the tea-party participants. He panics at the mention of the word "cat", much like The Mouse from the book and needs to have jam spread on his nose in order to calm down. The Disney version of the character also appears in House of Mouse and Mickey's Magical Christmas: Snowed in at the House of Mouse.

In Tim Burton's 2010 Alice in Wonderland film, the Dormouse is named Mallymkun. Unlike the sleepy character in the book, this Dormouse is an action-oriented swordswoman similar to the character Reepicheep from The Chronicles of Narnia. Because of her small size, she uses a pin as a weapon which was given to her by the Mad Hatter. She is seen the first time with the group when Alice first meets in Wonderland, and saving Alice from the Bandersnatch by plucking out its eye. She is voiced by Barbara Winsdor. This version appears again in the 2016 sequel, Alice through the looking glass. 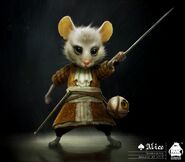