The Flowers are characters in the novel Through the Looking-Glass, and What Alice Found There. The flowers that Alice meets includes a tiger-lily, a rose, a daisy, a violet, and larkspur.can talk

Through the Looking Glass, and What Alice Found There

Alice first meets them in the garden, where they mistaken her for a type of flower that can move. The one Alice first makes contact with is a Tiger-lily, who gets the other flowers straight. When Alice asks them if they are frightened when no one takes cares of them, the rose tells her that the tree in the middle is ther . The daisies tell her that it says "Bough-wough," which is why branches are called boughs. Then all of them make shrill voices and don't stop until Alice whispers them that she will pick them if they don't hold their tongues. The violet is rude when she tells her that she had never seen anyone looked stupider, of course, she never saw anybody herself as explained by the tiger-lily. The rose tells her there is another flower that can move like her and looks like her, but she is redder, her 'petals are shorter', and wears her thorns on her head. The larkspur hers her on the gravel-walk. Alice finds out that the red flower is The Red Queen, which her hair are her petals and the thorn is the points of her crown. Alice goes to meet her and leaves the flowers. 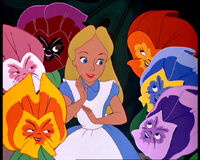 They appear in the 1951 animated film. There are a rose, an iris, a daisy, pansies, tulips, sweetpeas, blue bonnets, violets, a calla lily, a lily of the valley, a lilac, sunflowers, chrysanthemums, morning glories, daffodils, a tiger lily, a dandy lion, a white rose, a thistle, a yellow daisies, a rosebud and a dandy pup and sing the song The Golden Afternoon.

They appear in the 2010 movie. There are many flowers with faces but only a rose talk. The most appeared flowers there are the roses:A pink one, a yellow one, a green one, a red one and a blue one.