The Mock Turtle is a fictional character from the novel, Alice's Adventures in Wonderland by Lewis Carroll. He has the head, hind hooves and tail of a cow and the body, shell and front flippers of a sea turtle.

Origin of the Phrase

The Turtle is a visual pun on mock turtle soup, an imitation of green turtle soup made from the head, hooves and tail of a calf.[1]

The Mock Turtle is a very melancholy character that pines pathetically for the days when it was once a real turtle. The Gryphon introduces it to Alice in Chapter Nine and it tells her its history of going to school in the sea, but cannot understand the school system that she describes to it. Alice, in turn, is equally baffled by the Turtle's usage of the word. This is a pun on the two meanings of "school", referring in the Turtle's usage to a school of fish, and by Alice to an institute of learning. The studies that he told Alice are parodies of other studies: 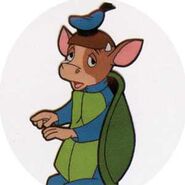 The Mock Turtle from the Jell-O commercial

The Mock Turtle in Alice in Wonderland (1949)

Ringo Starr as the Mock Turtle in Alice in Wonderland (1985)