The Playing Cards are characters in the novel Alice's Adventures in Wonderland. They are playing cards with a human head, arms and legs. They are loyal servants as well as guards for The Queen of Hearts. It is explained in the book that the spades are gardeners, clubs are soldiers, diamonds are courtiers, and hearts are members of the royal family.

Alice first meets three cards (the 2, 5 and 7 of Spades) in the Queen's garden painting white roses red. One of them explains that they accidentally planted white roses, and because the queen hates white roses they have to paint them red or the Queen will behead them. After the Queen arrives, she finds white roses and orders the execution of all three of them. Alice hides these 3 in a flowerpot, after this their fate is unknown. When Alice joins a game of croquet with the Queen and the other playing cards, the card soldiers act as arches. They have to leave being arches every time the Queen has an executioner drag the victim away. They also appear in the trial where the Knave of Hearts is accused of stealing the Queen's tarts. In the book, the clubs are soldiers, the diamonds are courtiers, the spades are gardners, and the hearts are children.the red queen uses them 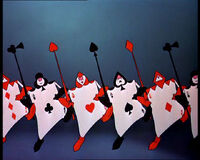 They appear in the 1951 animated film as playing cards with masks shaped like card symbols that match their spears and gloves. They also march as they chase Alice even over the hedges of the labyrinth. In the movie the clubs are the cards that paint the roses red, while the spades are shown as guards and soldiers instead.

In the novel The Looking Glass Wars, they appear as robots with their outer layer shaped as cards and spears. They can fly while in card form and can walk as well as spear in soldier form. They work for Queen Redd, the main antagonist of the series.