Alice in Wonderland Wiki
Register
Don't have an account?
Sign In
Advertisement
in: Characters, Through the Looking-Glass, and What Alice Found There characters, White chess pieces,
and 5 more
English

The White Queen (Mirana Marmoreal) is a fictional character from the novel Through the Looking-Glass, and What Alice Found There by Lewis Carroll. She is based upon the chess piece of the same name. She is portrayed by Anne Hathaway in the 2010 movie and the 2016 movie, in which she is the sister of The Red Queen.

The White Queen is one of the first characters to be seen in the story. She first appears in the drawing room just beyond the titular looking-glass as an animate chess piece unable to see or hear Alice. The Queen is looking for her daughter Lily; Alice helps this by lifting the White Queen onto the table, leading her to believe she was thrown up by an invisible volcano.

When Alice meets the Red Queen and joins the chess game, she takes the place of a white pawn (Lily) who is still too young to play. She does not meet the White Queen as a human-sized character until the fifth square. The White Queen , curiously, lives backwards in time to a degree, due to the fact she lives through the eponymous looking glass. She screams in pain until, rather then because, she pricks her thumb through her brooch, and she tells Alice of the King's messenger who has been imprisoned for a crime he will later be tried for and perhaps (but not definitely) commit in the end. The White Queen also claims to be over a hundred and one years old. When Alice finds this is hard to believe, the Queen responds that in her youth she could believe "six impossible things before breakfast" and counsels her to practice the same skill. The meeting ends oddly, with the Queen seeming to turn into a bespectacled sheepwhositsat a counter as Alice passes into the next square on the board.

Later in Chapter Nine, the White Queen appears with the Red Queen, posing a series of typical/Wonderland/Looking-Glass questions ("Divide a loaf by a knife: what's the answer to that?"), and then celebrating Alice's promotion from pawn to queen. When that celebration goes awry, the White Queen seems to flee from the scene by disappearing into a tureen of soup. Alice proceeds to 'capture' the Red Queen and checkmate the Red King, ending the game. 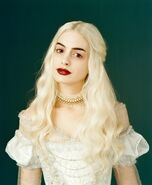 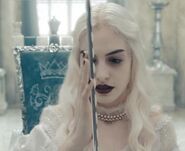