Alice in Wonderland Wiki
Register
Don't have an account?
Sign In
Advertisement
in: Actors, Female, The Many Faces of Alice

Viola Savoy (born July 23, 1899) portrayed Alice in the 1915 silent film adaption of Alice's Adventures in Wonderland. Savoy spent most of her childhood as a stage actress, reports of the time indicating that she was involved in around one hundred and twenty five stage productions, from Broadway to touring stock companies, and acted alongside some of the finest acting talents of the day. She claimed to have been named after the character of Viola in Shakespeares "Twelfth Night", a part she hoped to play someday herself. By 1912 she was best known for her portrayal of Virgie in the play "The Littlest Rebel". Despite her prolific stage appearances, she only made two films, both around 1915. Her acting career appears to end there, despite an astonishingly long lifespan. 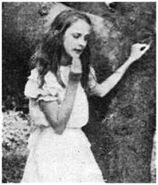