Alice in Wonderland Wiki
Register
Don't have an account?
Sign In
Advertisement
in: Heart no Kuni no Alice characters, Characters, Queens

Vivaldi (ビバルディ) is a character in the otome game Alice in the Country of the Heart~Wonderful Wonder World~. She is based on the Queen of Hearts. She is portrayed by Yuko Kaida.

Vivaldi has curly black hair and wears a red-and-black dress in Heart no Kuni no Alice. She is described as being very pretty. In the sequels, her hair grows out and her outfit is changed to be more "chic" and dominantly black.

She is notably more sweet-tempered than the original Queen of Hearts (she secretly likes cute things), although she still shouts the famous "Off with his head!" quote. The player can pursue her as a friend in the games. Vivaldi is not married to the King of Hearts, as she says she finds him depressing and that they are only the King and Queen by title. 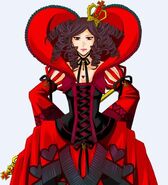 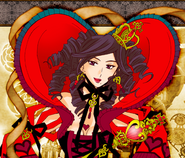